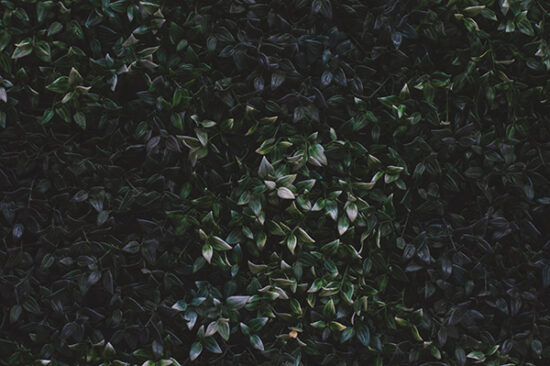 Structures can provide privacy, but many plants make screens that are more enjoyable and less stark than a wall or fence.  Hedge or screen plants can also provide some buffer from cold winds or unpleasant noises. 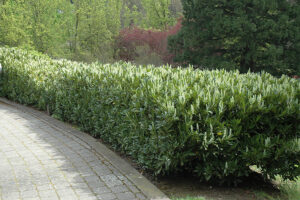 Several types of laurel are widely used for hedges and screens, providing some options in size and appearance.  Unpruned laurels may produce white flowers in spring and black fruit in summer – the fruits are a type of cherry, so the pits may be poisonous to dogs.

The bright red new growth of Photinia fraseri is much showier than most screening plants.  Like English Laurel, Photinia is fast growing and quite large.  Significant disease risk has reduced its use locally, but the diseases are manageable with good maintenance and some spraying.

Emerald Green Arborvitae (Thuja occidentalis ‘Smaragd’) is a tight dense conifer, popular because of its very narrow habit.  Over time can become quite tall if not kept pruned.  Rather slow growing, if you are in a hurry you might need to buy bigger specimens to start out.

Tolerates sun or a fair amount of shade, and drought tolerant

In colder climates the deciduous privets are used, but here we are mild enough to grow the evergreen types.

Texas Privet (Ligustrum japonicum ‘Texanum’) grows fast, but stops at a much smaller mature size then many other options – around 10 ft. or so – with a somewhat narrow vase shape.  Often produces white flowers with a musky scent in early summer.  Few disease or insect issues, but some risk of damage on our coldest winters. 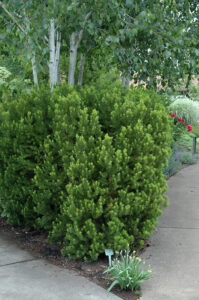 Widely used in shade, but tolerate all but the hottest sun locations – Few insect or disease issues

There are many types of yews, and they make some of the most attractive hedges and screens.  Unfortunately none are very fast growing, so some patience is required.

English boxwood (Buxus sempervirens) makes a lush and easily shaped hedge.  The small leaves and dense branching habit give an elegant effect, and prune well. It will require some patience though, as it grows relatively slowly (particularly when young).  Boxwood has a distinct fragrance to its foliage – not strong, but some people do not find it pleasant.

Prefers full sun – Few insect or disease issues, but may take some damage in our coldest winters

True or Culinary Bay (Laurus nobilis) makes a solid screening option.  Though a bit slow to start, established plants grow with good vigor, and the olive green leaves with purplish petioles are noticeably different from other screening plants.  If not pruned too hard or too often, may produce chartreuse flowers in spring and black fruit (non-toxic).

Perhaps the fastest evergreen screening plant available, Leyland Cypress (x. Cupressocyparis leylandii) has surged in popularity.  Though relatively narrow, this tree has quite a large mature size, so consider your available space carefully.

The only PNW native on this list, Pacific Wax Myrtle (Myrica californica) combines moderate size and growth with excellent durability.  The long narrow leaves give a softer visual texture than many other options. 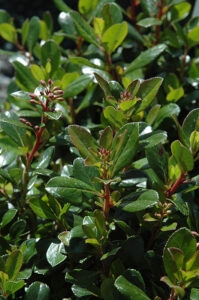 Pink Princess Escallonia (Escallonia x fradesii) is the most widely used screening shrub on the Oregon coast, tolerating the abusive salt and wind conditions of the shore.  Fast growing and attractive with bright pink flowers over a long summer season.  Smaller inland (though still respectable), it is at some risk of freeze damage during cold snaps.

All of our ornamental Camellias (Camellia japonica, Camellia sasanqua, and others) provide dense evergreen foliage and attractive flowers – some in the middle of winter!  Not very fast, but good moderate growth and size.  Some care is required in pruning to keep the bloom.

Slower and smaller than the big laurels, Linebacker Distylium (Distylium x ‘Linebacker’) has a more refined appearance, with multi-season interest.  Very early spring flowers are red, though so small you’ll only notice them up close. New growth, though not as bright as Photinia, has a pleasing coppery tint.

Vines can be a very space conscious way to provide some privacy also.  You will need to provide a trellis structure for the vines to grow on, and there are only a few evergreen varieties to choose from. 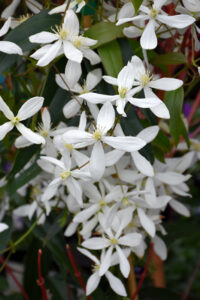 These vines grow fine in sun, or will tolerate some shade

There are a few evergreen varieties of the ever popular clematis vine.  These do not have the long bloom and large flowers of their deciduous cousins, though their white flowers are attractive.

Grows well in shady sites, but will also tolerate quite a bit of sun

The China Blue Vine (Holboelia coriacea) resembles the Snowdrift Clematis, though neither so coarse nor so large.  Flowers are much smaller, often passing without much notice.

While it will tolerate some shade, it performs best in full sun

Star Jasmine (Trachelospermum jasminoides) produces loads of very fragrant small flowers in the summer.  Often pruned back to a loose shrub, it is rather slow to develop height as a vine, though it has better density than many.

Search through our live inventory to see what is available now. Call us at 541-929-3524 if you have any questions! If we don’t have the plant you’re hoping for, or don’t have as many as you need, then we can look into ordering more for you. 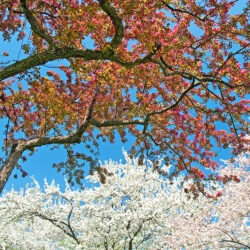 This resource contains a wealth of information about many of the plants that we carry each year. For growing and care information on specific plants to finding the ideal plants for your landscape and garden needs, utilize our plant finder tool!