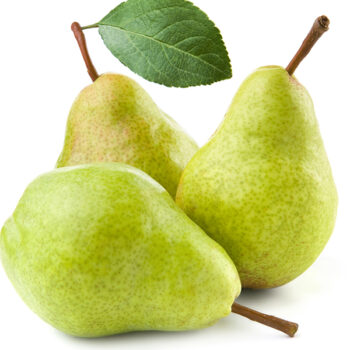 Pear trees benefit from a balanced granular or spike fertilizer. Feed them in fall or winter. Do not overfeed with nitrogen. Fertilizers with a relatively large middle number 3-5-2 work well as they encourage fruit and flower production.

Young pear trees should be pruned to encourage an upright shape. As the trees age remove the leader and thin to develop an open vase-shaped structure. Remove center sprouts and old fruiting wood on older trees. Asian varieties are likely to need thinning due to heavy production, which can lead to broken branches. For more details consider investing in a good pruning book.

Pears are subject to Scab, Rust, Mildew and Bacterial Canker. Insects including scale, Pear Psylla, and aphids can reduce yields and increase stress on pears. Codling moth can be a severe problem during fruit production. Timed preventative sprays provide the best protection against most of these pests. See a Spray Schedule for more details.

Please note that in order to get heavy and consistent production, you must have at least two different varieties of pears. For example a Anjou will not pollinate itself, but it will pollinate a Bartlett and vice versa. If a neighbor (within 1/4 mile) has a pear of a different variety then you will most likely get pears.

Bartlett – European pear, ripens late August. Most popular pear. Sweet, and flavorful right off the tree. This is also a great canning variety.

Comice – Ripens late October. Large, thick-skinned fruit with outstanding texture and flavor. Considered by many to be the best flavored European pear.

Conference – Ripens Sept/ October. Long bell shaped, bright green russeted pears are sweet and juicy with a smooth texture. Great for fresh eating, cooking and baking. Leave to ripen for 3 to 4 weeks aftewr picking. Excellent keeper, stores up to 2 month in the fridge.

Highland – Produces medium to large yellow fruit in early October. The pears have a rich, sweet flavor and are juicy and smooth textured. Great for fresh eating and desserts. Flavor develops with storage. Stores very well.

Red Bartlett – Red version of the well-known Bartlett. Fruit has a classic pear flavor with floral notes and a delicious buttery texture.

Rescue – Huge, beautiful, and tasty. The Rescue pear has a story of being rescued from developer demolition. The yellow fruit with reddish-orange blush is scab resistant. Ripens in September and good storage life. Well adapted to a Pacific Northwest garden.

Korean Giant – Ripens in mid-October. Crisp and juicy with high sugar content. Heavy yields of large and round pears that can weigh up to a pound.

Kosui – Ripens mid-September. Medium to large pear with brown skin and a crisp, sweet-spicy flavor. Among the best flavor of the Asian-types. Fruits stores well.

Raja – Ripens in September. A golden brown Asian pear that is very sweet and rich in flavor. Very productive, disease-resistant and hardy.

Shinko – Asian pear, that is late ripening in late August. Medium golden pears are very flavorful. This is a favorite with home gardeners because of its heavy yields and long harvest season. It also has an excellent storage life.

Shinseiki – Early Asian variety, ripens in late-July. Very large golden pears are sweet, crisp with a fine texture. Considered the variety with the best flavor and the longest storage life.