Having trouble deciding whether you want to order Italian or Carniolan bees? Here is a quick run down of the differences:

These bees were brought to the US in the mid-1800s courtesy of Reverend Langstroth, the same person who discovered bee space and invented the original Langstroth hive configuration. True to their name, they originate from temperate Italy and are well-suited to the mild climate of most of the US. The Italians quickly replaced the German Black bee that was in fashion at the time because they were gentler, had a longer proboscis (tongue), and were less susceptible to European Foulbrood. They have been the most popular bee for US beekeepers ever since!

Pros: Italian bees are highly productive foragers and once they get going for the summer they tend to maintain high numbers of worker bees. Their gentle demeanor makes them easy to work, and the light golden color makes the queens quite easy to see. They don’t tend to propolize heavily, but this tendency can vary by colony and conditions. They also don’t swarm quite as much as many other races.
Cons: Italians don’t forage as far as Carniolans. They can be slow to build in spring, especially under wet Willamette Valley conditions. They don’t respond to external conditions as readily as some other races, and may try to keep more brood than they can raise with their existing food stores. Italians tend to orient by color, so they can drift from hive to hive, leading to low populations in some hives and contributing to the spread of maladies. 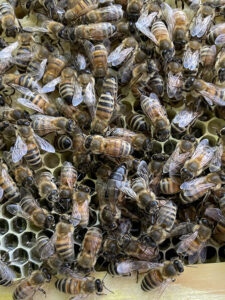 Carniolan bees hail from the harsher, colder climates of northern Europe. They tend to desire more storage space so that they can put away greater pollen and nectar stores for the winter. Swarms of this race tend to disperse more widely than Italians. Sue Cobey has worked to bring a fresh supply of Carniolans to the US, which helps to diversify the very limited genetic pool honey bees have here.

Pros: Carniolans respond quickly to changes in nectar and pollen availability. They can build up a workforce and break it down more quickly than Italians. They fly at colder temperatures. They may be less susceptible to brood pathogens and don’t rob as often, so diseases may spread more slowly in a Carniolan apiary. They are commonly agreed to be as gentle as Italians.
Cons: These bees are much more likely to swarm, as evidenced by many first-year Carniolan hives that swarmed here in the Willamette Valley last year. They may be slow to build up, but keep in mind that if resources are limited this can be an advantage. It can be difficult to see the darker queen with this race of bee.

Need a little direction in your plant search? Utilize our Plant Finder Tool to find the ideal plants for your landscape and garden, including growing and care information!